Last week Mr WithaY and I went on a one-day willow basket-making course.  You can't become a basket-maker in one day, but you can make a basket.  Here's how:

You start with 6 sticks, all approximately the same thickness and straightness.  You have to find the natural curve of the wood and follow it to get the proper basket base shape.  My sticks all looked to be either completely straight or wavy as anything, not the gentle curve talked about by the instructor.

Once you have aligned your sticks properly, you stab them with a deadly steel bodkin, pointy, sharp and scary.  Oh, before you do any stabbing, you grease the bodkin point with tallow.  It's positively medieval. 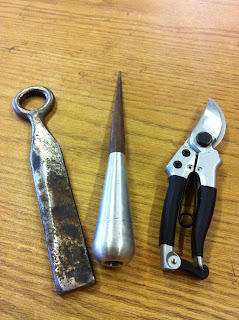 Our instructor told us how she once had to rescue her can of tallow from a greedy dog which had its face in it.  She didn't mention it to the dog's owners;  I expect they found out later that day. 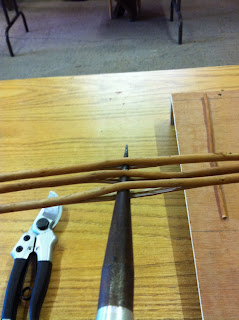 This is how the sticks look once you've STABBED them with the greased-up bodkin.  It's interesting how unnerving it is, having to stab something when usually you are all English and repressed and un-stabby.

Once you've finished stabbing, you slide one set of sticks through the other, thus: 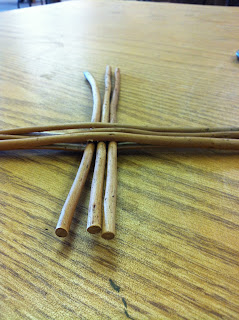 This is the basis for your basket.  I had to stop and have a cup of tea at this point, all the craftsmanship was exhausting.

After you've had tea and braced yourself, you start doing the next step.  It has a technical name which I have completely forgotten, but it involves weaving small willow stems to make the basket base. 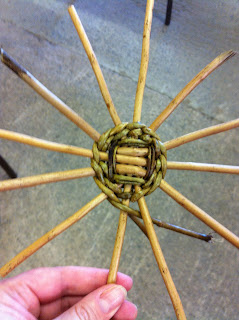 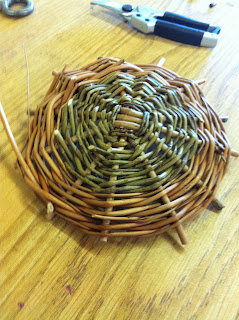 See the two different colour willows?  One sort has bark on and is slippery, the other sort doesn't and isn't.  They're both bloody awkward to weave properly.  You have to hold the spokes pressed hard into your tummy as you do this.  Painful.

Once you've got the base woven, and it is properly convex, you add long sticks to make the sides of the basket.  If it's not convex enough, you have to help it along using your knee and brute force. 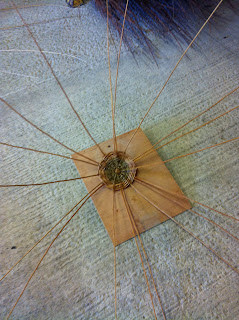 Adding the long sticks was fiddly and hilarious, with all of us wrestling with our baskets on the floor.  We got there in the end.

Once we'd got to that stage it was lunchtime.  Lunch was excellent. Home-made and delicious. I recommend it.

After lunch it was time to start building the basket up.  Da da daaaaaaaaa. 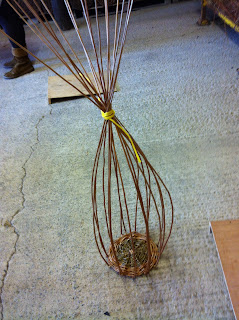 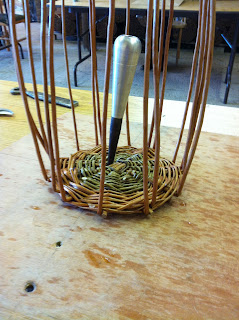 You have to STAB it once again with the bodkin to hold it in place while you weave the willow sticks.  That's harder than it looks.  Getting everything nice and even and tidy is even harder. 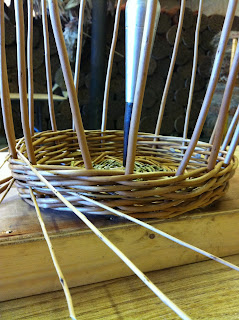 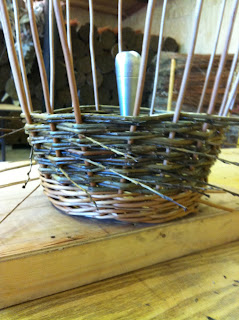 Once you've built up the base, you change both style and material to make the sides.  I was using a weaving technique that involved using two lengths of willow in pairs at once, in a traditional English style.  It's strangely hypnotic. 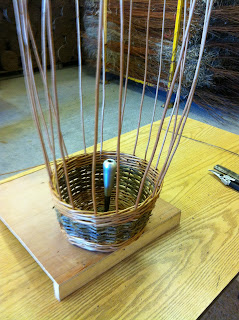 Then, when your basket is tall enough, you do another set of the stronger weave that you used for the base, to make the top nice and sturdy.  If your basket is less than perfectly circular, you assist it with your knee and brute force.

Once you've done that, you make the top edge, using the long sticks you stuck into the base to form the sides.  Remember them?  Yeah you do. 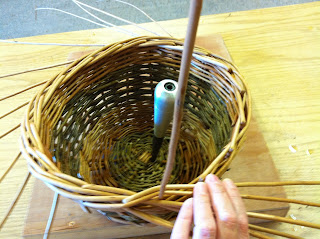 If you're a bit forgetful and have failed to keep your willow sticks wet, they will snap at this point.  The instructor will then rescue you and fix it so it will not show.  She was very good at rescuing people. 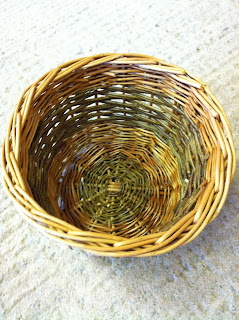 And at the end of the afternoon, you will have a lovely basket.

There were as many different baskets made as there were people on the course.  Mr WithaY made one with a French weave in the middle, and conveniently it stacks neatly inside mine.  There's tidy. 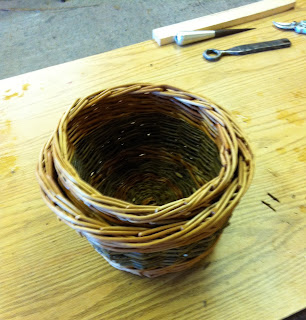 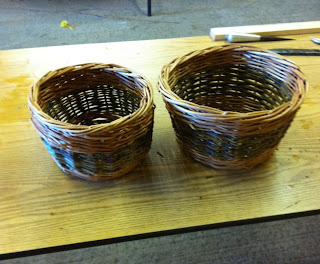 That's his on the left with the fancy French weave thing.  Sacre bleu. 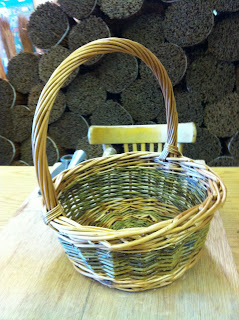 One lady made an up-and-over handle.  Very pretty.  Those round things in the background are big bundles of willow sticks.  The barn we were working in smelled lovely. 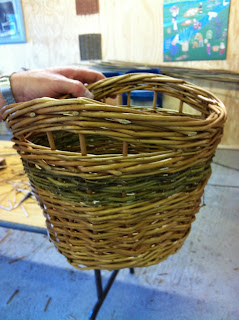 One chap made these rather fetching finger holes.  I shall try that next time I make a basket.

If at any point you got bored or frustrated, and went outside to look around, you could see where the willows grow: 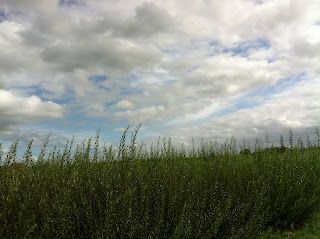 They had information boards up to let people know all the kinds of animals and birds you might see if you looked for long enough.  I saw bugger all.

I liked these gigantic sculptures, left over from a Glastonbury Festival, apparently. 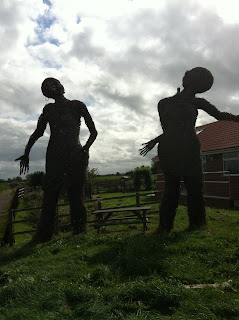 And the maze was fun, despite being very low.  I reckon I could have stepped over the partitions in an emergency. 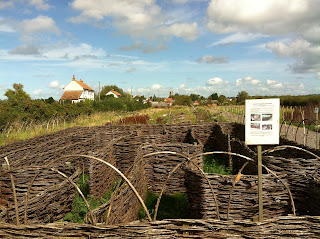 So, after a long and full day, a splendid vegetable lasagna and fruit crumble for lunch, a lovely drive through the Somerset Levels, and weird bruises where I hadn't expected any, I now own a basket that I made.  And it works. 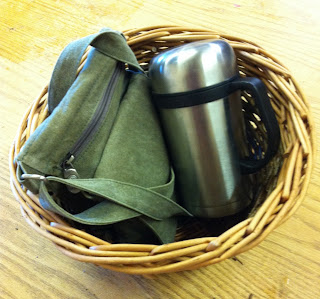 Did I mention  how much nicer this is than being stuck in the office?
Posted by livesbythewoods at 17:31

Email ThisBlogThis!Share to TwitterShare to FacebookShare to Pinterest
Labels: creative genius, genius at work, not at work, Wiltshire Orcs

Those baskets are brilliant. If I see a course, I'll do it too.

I did do new seagrass seats for all our dining chairs, I enjoyed that, and it was rather less painful than basket-making.

Cor, well done - aren't you clever? I shall never complain about the price of baskets again, having seen the effort involved, let alone the skill.

Soldering stained glass involves using tallow too - when it gets hot it smells like a rather nasty frying pan in need of a good wash. 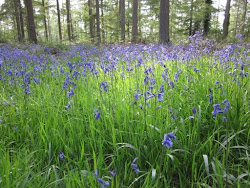